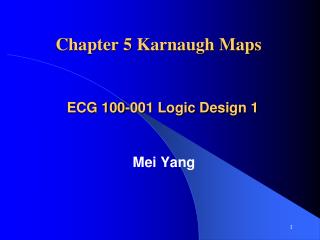 Chapter 5 Karnaugh Maps. ECG 100-001 Logic Design 1. Mei Yang. Minimum Forms of Switching Functions. When a function is realized using AND and OR gates, the cost is directly related the number of gates and gate inputs used. Chapter 5 Karnaugh Maps - 2. minimum forms of switching functions. when a function is realized using and and or gates,

Lecture 5 Karnaugh Maps - . algebraic procedures: difficult to apply in a systematic way. difficult to tell when you

Karnaugh maps - . last time we saw applications of boolean logic to circuit design. the basic boolean operations are and,

Karnaugh Maps - . what are karnaugh maps?. a simpler way to handle most (but not all) jobs of manipulating logic

Karnaugh Maps - . boolean algebra can be represented in a variety of ways. these include: boolean e xpressions truth

Karnaugh Maps - . not in textbook. karnaugh maps. k-maps provide a simple approach to reducing boolean expressions from a

Karnaugh Maps (K-Maps) - . a visual way to simplify logic expressions it gives the most simplified form of the

Chapter 3.5 - . logic circuits. how does boolean algebra relate to computer circuits?. data is stored and manipulated in