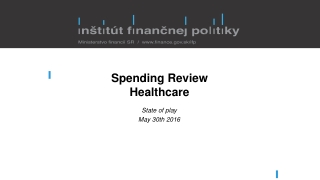 Spending Review Healthcare. State of play May 30th 2016. Summary – Healthcare According to Ministry of Finance. Healthcare Spending Accounts - . use it or lose it!. what is a healthcare spending account?. per the irs, guidelines are:

Comprehensive Spending Review 2007 - . the challenge ahead corin thomson. outline. what is it all about? what can we

The Impact of the Spending Review - . the role of the fire authority – political leadership and engagement are we

Spending - . spending—write a response to this quote.

The truth about The Spending Review 2010 - . before we start - some key terms. spending review 2010. deficit reduction of