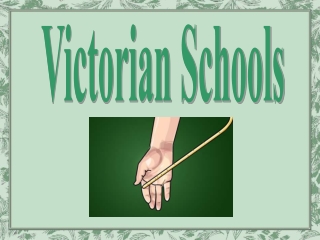 Victorian Schools. Only a few children attended school at the beginning of Queen Victoria's reign. Most poor children worked, and their earnings were an important part of the family income. If they went to school, their families would lose this money. Victorian Schools - . nearly every victorian child went to school. they might have had a classroom like this. the

Schools at Victorian Times - . children. a ll children from five to thirteen had to attend school by law. lessons

High Performing Victorian Government Schools - . how our best performing schools come out on top a snapshot. there is a

Victorian Era - . the victorian era pertains to the 64 year reign of queen victoria of england. she reigned from

Victorian England - . with a partner. what do you think of when someone says “victorian” / “victorian

Victorian Storms - . the victorian storms fit the criteria for a ‘disaster’ due to its/their damage and size.