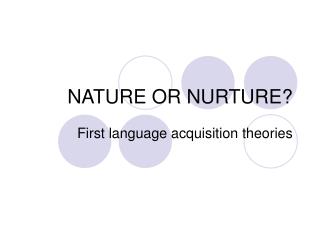 Nature via nurture - . mistaking the problem?. matt ridley, nature via

Nature and Nurture - . biopsychology. goals:. what is the nature-nurture issue? what are key issues in behavior genetics?

Nature vs Nurture - . genes or environment?. oxford university figures: 57.5% of places went to applicants from the state

Nature Vs. Nurture - Liam moore and riley dewaters. nature vs. nurture. nature side. your personality is based on your

Nature vs Nurture - Which has more influence over how you behave-- your genetic make-up? or your environment?. nature vs