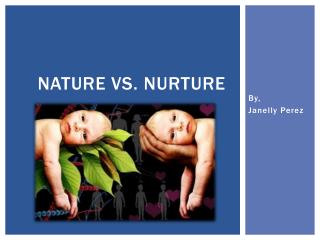 Nature Vs. Nurture . By, Janelly Perez. The Debate. For years the nature vs. nurture debate has been an issue in psychology. The debate is how genetic inheritance and environmental factors play in a persons development and characteristics and which one plays a bigger role .

Human Development - . ap psychology. chapter objectives:. ap students in psychology should be able to do the following: