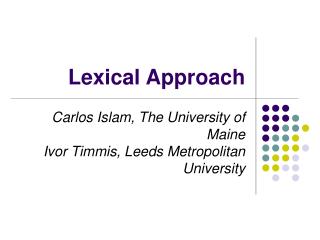 Lexical Approach . Carlos Islam, The University of Maine Ivor Timmis, Leeds Metropolitan University. The theory of language . Task 1 Look at this version of the introduction. What do the parts printed in bold in square brackets have in common?

The Lexical Approach Regina Jirankova - . regina jirankova. one small step for the teacher , one giant leap for the

THE LEXICAL APPROACH ( Language teaching ) - . lexis/lexicon. refers to the belief that building blocks of language

Lexical Semantics - . introductory course clm tt. the components of language. meaning. a language is a system of

Adapting activities in the Lexical Approach - . michael lewis. best done co-operatively in pairs or groups have both

Optimizing a Lexical Approach to Instructed Second Language Acquisition - . frank boers. what parts of language is this