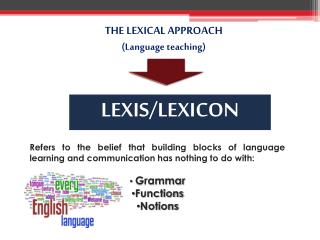 The Lexical Approach Regina Jirankova - . regina jirankova. one small step for the teacher , one giant leap for the

Adapting activities in the Lexical Approach - . michael lewis. best done co-operatively in pairs or groups have both

Lexical Analysis The Scanner - . introduction. a scanner, sometimes called a lexical analyzer a scanner : gets a stream

Optimizing a Lexical Approach to Instructed Second Language Acquisition - . frank boers. what parts of language is this

Lexical Analyzer - . the main task of the lexical analyzer is to read the input source program, scanning the characters,