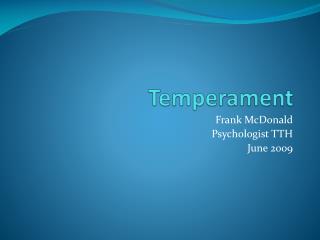 Temperament - ˈtemp( ə ) rəmənt / ( noun) a set of in-born traits that organize the child's approach to the world.

Who Am I? : Temperament - . temperament = response style to environment; emotional reactivity and intensity. temperament

TEMPERAMENT AND TEACHING - . how we decide, how we live, how we structure our lives, and where we get our energy.

Keirsey Temperament Sorter - . keirsey temperament sorter. based on work done by myers and briggs who created a

Temperament - . “early patterns of observable behavior that are presumed to be biologically based and that distinguish

Temperament - . this is a combination of inborn traits that subconsciously influence our behaviour. it influences

Rural temperament and character: A new perspective on retention of rural doctors - . diann eley the university of

Introduction to Temperament, Psychological Type - . a. friend, follower of sigmund freud but disagreed over role of

Temperament - . presented by donna j. habenicht, ed.d. what is temperament?. “temperament is the behavioral style of an

Understanding Temperament and Establishing “Goodness of Fit” - . your image of the child. each one of you has inside