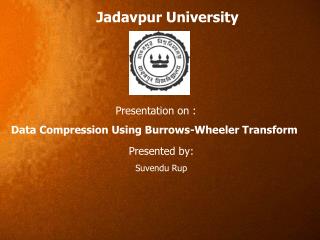 Jadavpur University. Presentation on : Data Compression Using Burrows-Wheeler Transform. Presented by: Suvendu Rup. Introduction :. What is Data Compression ?. - Data compression is often referred to as coding, where coding is a general

Probing the Sevolution of the Universe at the LHC - . amitava datta department of physics jadavpur university kolkata.

Computing on Wheels: Insider’s look at the automobile of today and beyond - #ghc13. computing on wheels: insider’s