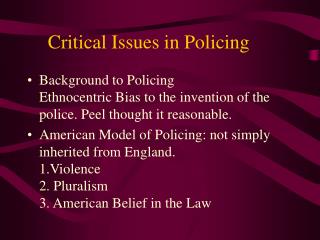 Moral Issues In Policing - . moral issues in policing. should police be held to the same or higher standards than other

Policing: Issues &amp; Challenges - . “the police are the public &amp; the public are the police.” sir robert

Critical Issues in Administration - June 11, 2012 find us on twitter @ instructionalle. critical issues in

Critical issues - . maintaining food and energy security with a minimum amount of resources and increasing climate

Critical Issues in Special Education - . trenita holladay evidence based practices. what is scientifically based