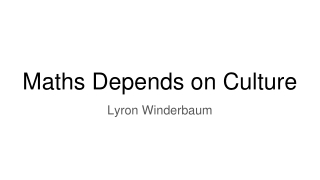 Maths Depends on Culture. Lyron Winderbaum. The Process of Learning/Developing Maths. So Where Does Culture Fit?. Our perception of reality is biased by our values. Our values are largely a product of our culture. So, Culture → Values → Perceptions → Maths. Life Depends on the Sun - . sunlight is the primary source of energy in an ecosystem. everything you do requires

Ch 5 – life depends on Photosynthesis - . photosynthesis is an important metabolic pathway in which producers use

Internal Energy Depends on the Conditions - . although we have no way of knowing the precise value of the internal energy

Maths on the Move - . win a flat. this is so much fun. i have a reception/year 1 class. i tried the win a flat

Depends Lineup - Go to http://www.diaperbuys.com to get the best price for the new depend silhouette for women and real