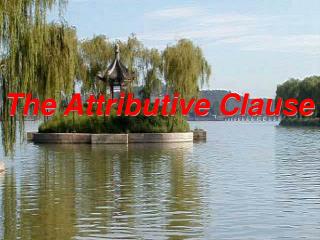 The Attributive Clause. Combine the following sentences, using attributive clause and some conjunctions. Li Hua is a student. She is a girl. She is 16. Her dad is a teacher. Her mother is a teacher,too. She is our monitor. She is very strict with us. This makes us angry. Waivers, Hold Harmless Agreements and Certificates of Insurance - What is a waiver?. legally defined, it is the

If clause - . there are four types of conditional sentence. it is sometimes called the &quot;if&quot; clause. it

The Supremacy Clause - . establishes the constitution as the “supreme law of the land” federal law supersedes state

Chapter 33- Conditionals - . conditions: the basics. a condition is, at its most basic, a compound sentence consisting of

BELOW THE CLAUSE - Clauses as themes theme-rheme is purely a structure within the clause: a structure whose elements are,

3. Finally, you will notice that the clause answers one of - The a d v e r b clause. recognize an adverb clause when you

Grammar: Attributive clause - . my dream house is a villa . the villa is located in the centre of a forest. my dream

1. The status of Adjunction The nature of Adjunction: - . attributive adjectives relative clauses adverbs other adjuncts