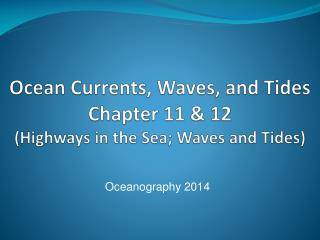 Ocean Currents, Waves, and Tides Chapter 11 & 12 (Highways in the Sea; Waves and Tides) Ocean Currents, Waves, and Tides Chapter 11 & 12 (Highways in the Sea; Waves and Tides)

Energy from Tides and Waves - . tidal action caused by gravitational effects of moon and sun on earth’s oceans. energy

Tides and Eclipses - . tides. the tides are the rising and falling of the ocean surface as a result of the gravitational

Ocean Waves and Tides - . ocean tides. tides. the rise and fall in sea level is called a tide . caused by a giant bulge

Tsunami, Seiches and Tides - . chap 11. other waves. the waves discussed so far, seas, swell and breakers, are all types

Tides - . created by michael kramer . what is a tide?. tides are periodic, short term changes in height of the ocean

Tides for Sea Kayakers - . overview. what is a tide? types of tides – spring and neap high and low tides rule of

Tides - . tides are huge shallow water waves. they are caused by: - gravitational force of moon and sun motion of the

Chapter 11 – Tides - . a tidal bore is formed when a tide arrives to an enclosed river mouth. this is a forced wave

Tides - . a. tides. tides are changes in the surface level of earth’s ocean water tides are caused by the effects of