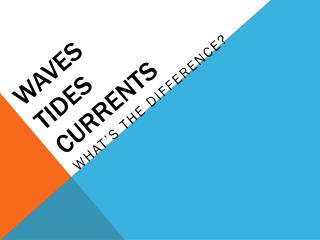 Waves Tides Currents. What’s the difference?. WaveS. Definition: Movement of energy through water Created by energy being transferred from the wind through the water. Surface waves are caused by the wind. . Factors that affect the height & size of a wave. Strength of the wind

Energy from Waves and Tides - . by rushil desai and macallan brown. what is wave energy?. an essentially shared,

CH 3 Waves and Tides - . waves the wind not only drives surface currents, it causes waves. fundamental features of water

Ocean Motion - . currents. ocean currents are movements of ocean water that follow a regular pattern. there are 3

Currents, Waves, &amp; Tides - . highways in the sea. causes of currents. what forces are responsible for currents?

Energy from Tides and Waves - . tidal action caused by gravitational effects of moon and sun on earth’s oceans. energy