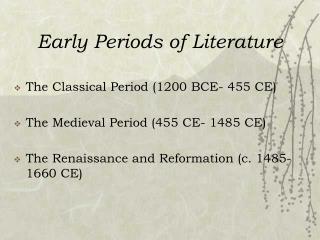 ENGLISH LITERATURE - . from the middle ages to our days. anglo-saxon period (5 th – 10 th

The Romantic Period of American Literature 1820-1865 - . definition of the romantic period. romanticism- an artistic

A Gathering of Voices: The Literature of Early America ( Beginnings to 1750) - . literature of the period. native