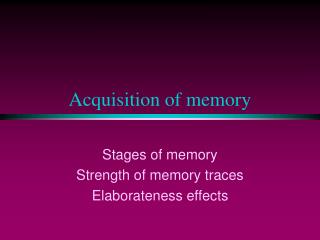 Memory - . reconstructing the past.memory and the power of suggestion.in pursuit of memory.the three-box model of

Mergers and Acquisition RWJ Chp 30 - . the basic forms of acquisitions. there are three basic legal procedures that one

Memory - . chapter review. process by which we retain and recall something learned or experienced. what is memory?.

First language Acquisition - . objectives. know the language system a child of the age 5 acquire. list the issues that

Why Our Memory Fails Us - . psychology miss gardner. warm-up. what are some reasons that our memory might fail us?.