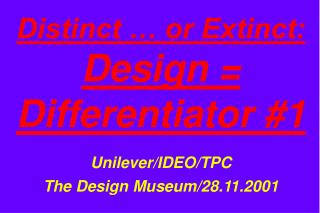 Distinct … or Extinct: Design = Differentiator #1 Unilever/IDEO/TPC The Design Museum/28.11.2001. All Slides Available at … tompeters.com Note: Lavender text in this file is a link. I. Welcome to the Age of “GAK!”. Software Design - . chapter 11. purposes of design. design transforms the specification into a design. the end purpose of