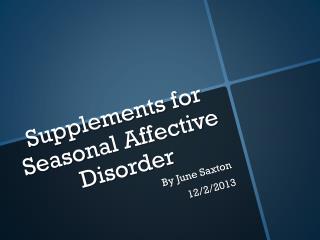 Supplements for Seasonal Affective Disorder. By June Saxton 12/2/2013. This information is not intended as medical advice.  Please consult with your physician regarding any of your health issues and concerns . Disclaimer.

Melatonin - . by: levi krolikowski. where is melatonin produced?. melatonin is produced in the pineal gland. the pineal

Mood Disorders - . chapter five. introduction. what is sadness and how does it differ from a mood disorder?. dsm-iv

Bipolar Affective Disorder - . introduction. bipolar disorder (bpd) is one of the most severe forms of mental illness and

Stress and Emotional Health - . what is stress?. stress is a normal physical response to events that make you feel

Introduction to Psychological Science - . study session, exam 3. which of the following is not considered a mood