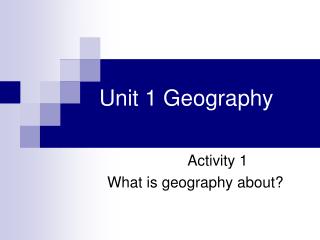 Unit 1 Geography. Activity 1 What is geography about?. What kinds of topics are covered in geography?. List 10 different topics on your activity sheet. Each member of the group must contribute ideas. UNIT 2 Georgia Geography and the Prehistoric Period - . unit 2 essential question: how can i describe georgia with regard

UNIT 1 Georgia Geography and the Prehistoric Period - . unit 1 essential question: how can i describe georgia with regard

Unit 1 – The Basics of Geography - . chapter 3 climate and vegetation page 49. what causes seasons? the earth revolves

World Geography Unit 2 Thinkers - . 7. what kind of information might be included in chart showing standard of living? 8.

Unit 1: What is Geography? - . part 1: introduction and the five themes of geography. unit 1 objectives. upon completion

World Geography Unit 2 Thinkers - . 19. what is gps and how has it helped to improve transportation? 20. list 3 reasons

Louisiana’s Geography - . unit 1. geography. something found in nature such as weather, plant life, water, and land

Unit 1 Geography - . georgia performance standard (gps) ss8g1: the student will describe georgia with regard to