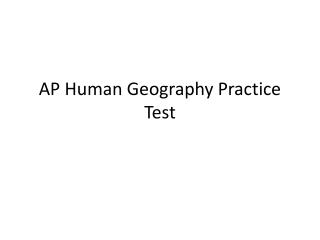 AP Human Geography Practice Test. 1. The relationship between an object on the surface on Earth and the same object on a map projection is known as what?. map class map projection map scale map distortion map direction.

What is Geography? - . geography is the study of what is where, how it got there, and why we care. what is human

South Asia Human Geography - . over 1.2 billion people–more than one-fifth of the world’s population–live in south

Human Geography of Europe - . human geography. 48 countries and micro-states 732 million people one of the most densely

Latin America Geography Practice Test - . questions 25-52. 25. which metal is mined more in mexico than anywhere else? a.

Branches of Geography - . there are two main branches of geography : physical /human. physical geography is the study of

Human Geography Lesson 1 - . demographics. bellringer – page 11. what is human geography? use book pages 58-65 what are

What is Geography? - . ap human geography. geography is…. the scientific study of the location of people and activities

What is Geography? - . geography is the study of what is where, how it got there, and why we care . what is human