Theodicy and the Book of Job - PowerPoint PPT Presentation 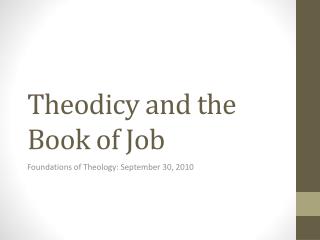 Theodicy and the Book of Job

Theodicy and the Book of Job. Foundations of Theology: September 30, 2010. 4:7-9, 17; 6:24-30. Eliphaz speaking to Job Job must have sinned to deserve his suffering as punishment Eliphaz is defending God’s justice View of God = (strict) judge

Theodicy and the Book of Job

John Hick soul-making theodicy - . hick first presented this theodicy in evil and the god of love in 1966 (revised in

The Book of Job and the Problem of Evil - . the poem: the curse. let the day perish in which i was born/ and the night

The Problem of Evil - . how can a god who is completely good allow evil to exist in the world?. two kinds of evil.

Where is God?: Making Sense of Suffering and Evil - . hard questions if god is so good, why is there so much evil in the

Job - . a theodicy. theodicy. a literary attempt to reconcile beliefs about divine goodness with the prevalence of evil.

The Problem of Evil by Kevin Rogers - . an all-powerful god who can, but does not, prevent the evil in the world, cannot

Why Does God Allow Suffering? - . series: apologetics 101 text: romans 8:18. why suffering?. this life is filled with

Problem of Evil, pt. 1. - Problem of evil, pt. 1. classical formulation of the problem. kushner’s restatement of the

The Problem of Evil and Pain - . 7. summary and

The Wisdom Books - . proverbs, job, ecclesiastes. the character of ot wisdom. wisdom material is scattered through ot but