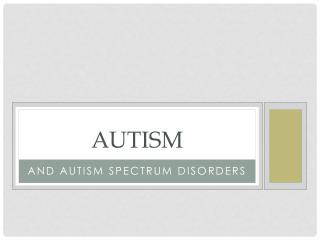 AUTISM. And autism spectrum disorders. What is autism?. Autism Spectrum Disorder is a term used to describe a subset of the PDDs. This subset includes Autistic Disorder (autism), PDD-NOS, and Asperger's Disorder/Syndrome (AS). These disorders are characterized by: Communication Behaviour