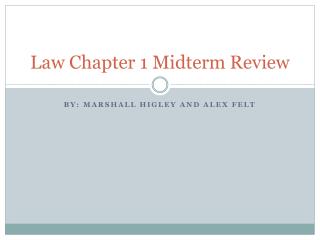 Law Chapter 1 Midterm Review. By: Marshall Higley and Alex Felt. The power to decide a case is termed. Fiat The long arm of the law Sanction Jurisdiction. D. Jurisdiction. Governing rules and regulations passed by a city council or county government are referred to as. Statutes Midterm 1 review - . jundong liu school of eecs liu@cs.ohiou.edu. what is a dfa?. what’s an nfa. what’s the

Chapter 1 – 4 Midterm - . review. rules. answer only when called upon rotate when question is answered correctly bonus

MIDTERM REVIEW MEC 1 VOCABULARY - . mark the best option for each of the sentences:. 1- some areas of japan are famous

Chapter 3 Trashketball Midterm Review - . trashketball rules. students will be split into teams of 4 each student will be