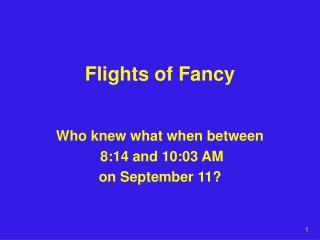 Flights of Fancy. Who knew what when between 8:14 and 10:03 AM on September 11?. Understanding what should have happened. The flights -- destinations and times The players -- civilian and military The protocols -- emergency vs. hijack. Flight Crashes. 15 th Chapter Flights of Fancy - . jevh maravilla period 6. the beginning. humans couldn’t be able to fly, even with

'Flights of Fancy' Key Stage One - . for gifted and talented children at key stage one three lessons of 45 minutes each.

Fancy France - . by: regan silverton. land &amp; climate. how is their geography, climate, and natural resources