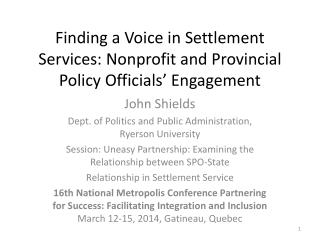 The Northern Song - . expression of wen in the song rule. a benevolent policy on the treatment of officials. emperors

Finding Your Voice - . it’s a matter of style. what is this thing called voice? how do i find mine?. your voice is a

Getting Started: Nonpartisan Voter Engagement at Your Nonprofit - . presented by. about us. founded in 2005, nonprofit

No Child Left Behind and Beyond: The Lay of the Federal Policy Land &amp; Finding the MIDDLE GROUND - . eplc annual

“You, Your Experience – Together, Our Voice” - . welcome john madigan – senior director of public policy, afsp.

Settlement systems under ABT - . what is settlement ?. settlement means “entire process of payment/ receipt/

Nonprofit Blogging - . i’m only smiling because they make me. seriously. i can’t remember anything anymore!. my

Introduction to FirstClose - . settlement services for lenders nationwide. about firstclose. founded in 2000 located in