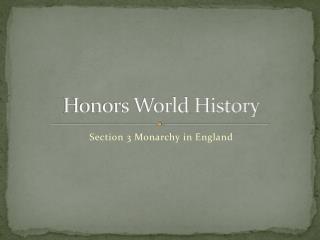 Honors World History. Section 3 Monarchy in England. Background. head of the state had control over EVERYTHING.

Geometry Honors Unit 1 Test Warm-Up - . find a trapezoid in the given image, and justify why it is a trapezoid. b. a. e.

Why You Can’t Say “NO” to Honors - . a guide for students. judith k. winn school of honors what we are. a n

Catalyst – Honors Bio - . what part of the cell controls what can come in and out of the cell? what types of cells have

Honors World Literature - Week 33. honors world literature. clear your desk of everything. you will have 9 minutes to

Bell Ringer Welcome to Honors World History! - . why is history important? write down homework . bad behavior: you do