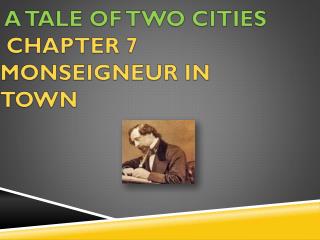 A Tale of Two Cities Chapter 7 Monseigneur in Town. Main Characters. Monsignor – A rich noble who was one of the great lords of the court. Farmer General- Handles Monsignor's finances. Monsieur Orleans- Professor of the provinces. Cities and the Industrial Revolution - . the rapid growth of cities caused a large _____shortage. housing. the sudden

Urban Patterns - . chapter 13. urbanization. def .- the process by which the pop. of cities grows made up of 2 factors an

Cities &amp; Urban Land Use - . where are cities located? and why?. site * absolute location of a city * a city’s

Shark Tale - . the theme--- nobody vs somebody. appreciate a poem by emily dickinson --- i’m nobody! who are you?. i'm

URBANIZATION or HOW CITIES GROW - . geography 1050 the geography of cities. outline. global patterns of urbanization

The World‘s Happiest Cities 世界上前十名最快樂的城市 - . why they are so happy and we chinese’s cities