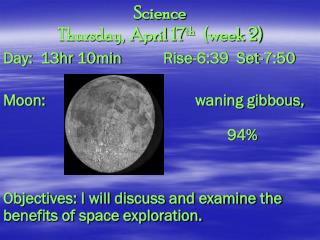 Thursday, April 17 th - . pick up a slip of paper from the bin on ms. gammie’s desk. it does not matter which one you

Thursday October 17 th - . aim : how can we be best prepared for tomorrow’s unit 2 exam on factoring polynomials ? the

Thursday, April 17, 2008 - . carryforward estimates for “a” funds. what is carryforward?. surplus funds that are

Thursday, April 11 th - . bell-ringer : please pick up and complete (with a partner), the unit review worksheet on the