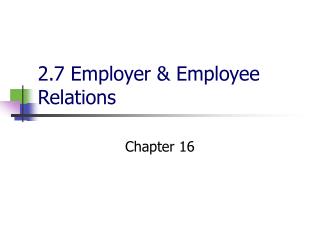 2.7 Employer & Employee Relations. Chapter 16. Vocabulary. Trade Union An organization of working people with the objective of improving pay and working conditions and providing them with support and legal services. Industrial Action INTERNAL EMPLOYEE RELATIONS - . chapter objectives. discuss the case for and against downsizing explain discipline and

The Employer/ Employee Relationship - . kimberley childress, cpp february 20, 2010. what are the employer

EMPLOYEE RELATIONS - . employee relations. misconduct-normally a failure to follow a law, rule, or regulation, such as

Employee Relations - . what we do . encourage open communication about diversity and multicultural issues. support

Developing Employee Relations - . 13. challenges. what are examples of programs used to facilitate employee

EMPLOYEE RELATIONS - . chapter eleven. the most valuable and important resource within an organization is its employees.