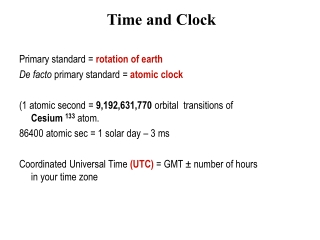 What time is it, Cuckoo? - . cuckoo, cuckoo! my name is cuckoo. i live in a clock. i am busy telling the time. get up,

MTSS BASICS - . every student must clock in at the beginning of his or her shift and clock out at the end of the shift.

SYSTEM CLOCK - . clock (clk) : input signal which synchronize the internal and external operations of the microprocessor.

Writing times in digital - . when we read the time off an analogue clock we read the minutes first, and then the hour.

The PC’s Real-Time Clock - . an introduction to the capabilities and programming of the real-time clock and cmos