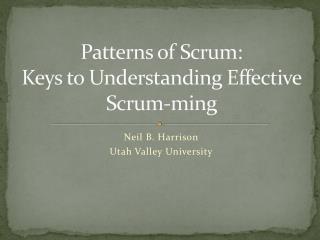 Patterns of Scrum: Keys to Understanding Effective Scrum- ming. Neil B. Harrison Utah Valley University. TalkMap. Who And a bit of history What we are doing Creating a pattern language of Scrum A few words about what patterns are … Why Why is the pattern language so important Agile: Unlocking our human potential - Updated talk given at the psychology of scrum-agile user group in london on monday

(T) - SQL SELECT - . the basics of getting data. peter gfader. specializes in c# and .net (java not anymore) testing