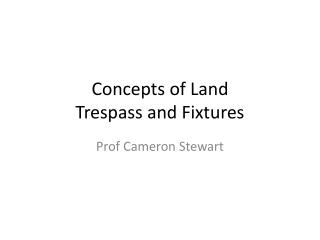 Concepts of Land Trespass and Fixtures Concepts of Land Trespass and Fixtures. Prof Cameron Stewart. What is land?. Land is a three dimensional space referable to a point on the earth’s surface Land can exist above the surface and below the surface. Trespass to land.

Concepts of Land Trespass and Fixtures

Jigs and Fixtures - . definitions. jig: a device that holds the work and locates the path of the tool. fixture: a device

Trespass to Chattels: eBay and Intel - . richard warner. three questions. first : to what extent does one impliedly

Jigs and Fixtures - . 3june , 2010 by: abid ali abid. overview. what are jigs and fixtures why they are important basic

March Fixtures - . 5 saturdays in march. “ggc winter rules” to apply. “a ball landing on the fairway must be either

Fixtures - . andrew franks . toilet. a large bowl for urinating or defecating into, typically plumbed into a sewage

LITURGICAL FIXTURES - . altar. the altar standing in the sanctuary recalls both the last supper and the cross. it

Tolerated Trespass – A Legal Anomaly - . where we are and how we got there: a brief overview by mary martil of marsons

TRESPASS TO THE PERSON - Relationship with other avenues. criminal injuries compensationcompensation orderspolice