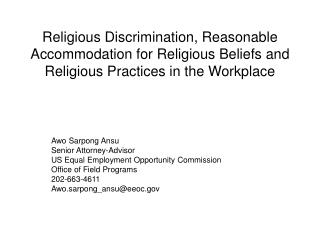 Religious Discrimination, Reasonable Accommodation for Religious Beliefs and Religious Practices in the Workplace

Religious Discrimination, Reasonable Accommodation for Religious Beliefs and Religious Practices in the Workplace