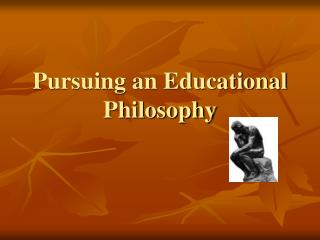 Philosophies of Education - . by: nicole squared. progressivism. classroom activity : field trip such as going to the

Gender, Technology, and Development in South India - . meredith anderson louisiana state university. why do women in the

Pursuing an Educational Philosophy - . chapter 8. 5. 0. my philosophy is. live for today, tomorrow we die. reach for the

Philosophy and TOK - . how it

Five Philosophies of Education - . by: jaia rush. progressivism. chorus class- practicing music and performing for other

My Educational Philosophy - . by: kiersten mccartney. quotes:. “education is the ability to listen to almost anything

Philosophies of Education - . by: pamela johnson. essentialism . activity: have students take notes on a power point

JOHN 13:1-12 - . william borden was the heir of the borden dairy estate. he was millionaire when he graduated from high

Choosing Optimism as a Philosophy of Life - . a skills development module by michel listenberger. workshop overview.

Philosophy of Education - The learner's way". in groups of 4 to 6 people answer the questions on slide 2. remember,