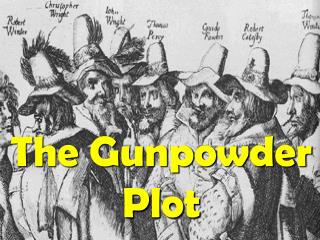 The Gunpowder Plot. In 1605 King James 1 was the King of England. Not everybody in England liked him. A man called Guy Fawkes decided to blow up the Houses of Parliament with the King inside. Guy Fawkes and his friends planned to use gunpowder to blow up underneath the King’s chair. The Rise and Decline of the Gunpowder Empires - . ap world history 1450-1750. overview. rise of ottomans and mughal

What is Gunpowder? Why is it important in history ? - . early history. china 919 ce projectiles in bamboo tubes why

THE GUNPOWDER EMPIRES - . essential question : what were the achievements of the “gunpowder empires” of the ottomans,

Guy Fawkes/Bonfire Night - . bonfire night. in england on november 5 th there are firework displays and bonfires across

Guy Fawkes and the Gunpowder Plot - . 1603. james i became king of england he fined catholics for not attending church of

Guy Fawkes - . who was he?. who was guy fawkes?. fawkes was born and educated in york. his father died when fawkes was

Gunpowder - Was invented by the chin dynasty a.d850 in china the gunpowder was invented just to defense their country

Plot - Why plot?. plot is what drives the story forwardif you want to have a good and interesting story, you need a good