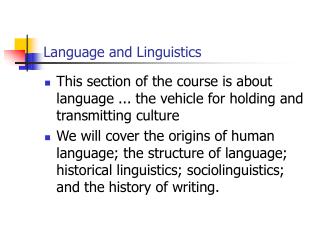 Language and Linguistics. This section of the course is about language ... the vehicle for holding and transmitting culture We will cover the origins of human language; the structure of language; historical linguistics; sociolinguistics; and the history of writing. Language origins .

Language and Linguistics - . linguistics: the scientific study of human language, broadly construed how is language

Linguistics and Language Teaching - . lecture 9. approaches to language teaching. in order to improve the efficiency of

Language, Linguistics and the Brain - . sharon armon-lotem. from neuron to mind session 5: language as a window to the

Linguistics 21: Language and Thinking - Lecture 1: critical thinking what is it?. when you hear the term critical