HOW TO HAVE A NICE AFTERLIFE - PowerPoint PPT Presentation 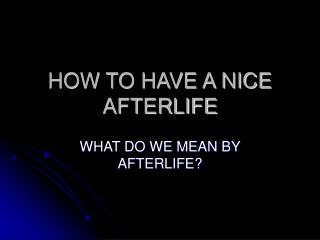 HOW TO HAVE A NICE AFTERLIFE

HOW TO HAVE A NICE AFTERLIFE

Whispers of Immortality - . t.s. eliot. explanation: stanza 1 &amp; 2. webster was much possessed by death and saw

Day of the dead altars - . cameron h. traditionally, every family in mexico builds an altar for their family or friends

EVERYTHING EGYPT - . 6castaldo 2014. fast facts family mother: nefertiti’s mother was tiy, the royal nurse for the

What is Beowulf ? - . it is a familiar theme: a brave hero battles his archenemy, an evildoer who will stop at nothing to

The Evil Eye - . the belief in the evil eye dates back to ancient times…. the belief centers around the idea that those

The Love of Money is the Root of All Evil: Pay Satisfaction and CPI as Moderators - . paper presented at academy of

On Tour With Five Finger death punch - . this presentation will take you on tour with the greatest band of all time!.

The Odyssey Book 11 - . questions and discussion. recap. circe tells odysseus that before continuing on his journey, he

“The Problem of God” Symposium - . next week!. is the god of the old testament a jealous , unjust, unforgiving,

UNIT 02 - . the mediterranean world, 600 bc. the birth of athena. athena and attributes. myths of athena. basic roles

Gary Soto - . b y chazzman caldwell and andrea thomas. about the

You Wouldn't Want to be an Egyptian Mummy!