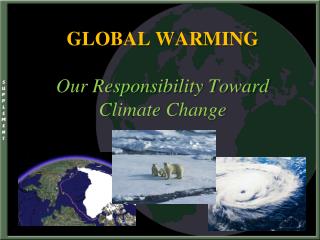 GLOBAL WARMING Our Responsibility Toward Climate Change Global Warming “Not only is it real, it's here, and its effects are giving rise to a frighteningly new global phenomenon: the man-made natural disaster. – Barack Obama Outline and Objectives Global Warming The scientific research