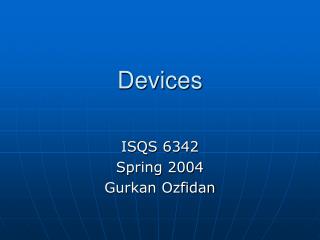 Devices - C. omputer. devices. i. nput. input peripherals. input devices are used to feed data to your computer. the

devices... - Inputs and output. devices. keyboard. the commonest way to enter data into a computer. each key is simply a

Devices - . chapter 9. learning objectives. understand the purpose of a network firewall and the kinds of firewall

Poetic Devices - . the sounds of poetry. onomatopoeia. when a word’s pronunciation imitates its sound. examples

Syntactical Devices - . important: these are different from the grammar concepts that we have been covering because these