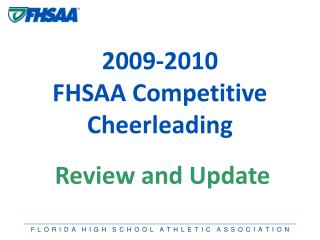 Monday 2 nd February 2009 - . learning outcome: use viewpoint to understand the meaning in a poem. different viewpoints

Wednesday February 25, 2009 - Objective(s): apply knowledge of plot structure, characterization, and cause and effect by

CHEERLEADING - . by : sophia koosha. stunts. stunts are something when you hold some one up. . base. a base is some one

Competitive Cheerleading - . by: hannah. definition of a sport. sport is defined as a physical activity that is governed

Tuesday February 24, 2009 - Objective(s): apply knowledge of plot structure, characterization, and cause and effect by

August 27, 2010 - . objective: students will compare and contrast opening and existing business versus starting a new The Comprehensive Geriatric Assessment and Geriatric Syndromes - . the university of texas health science center at

Industry &amp; Competitive Analysis - . a framework for analyzing competitive rivalry and dynamics in an industry.