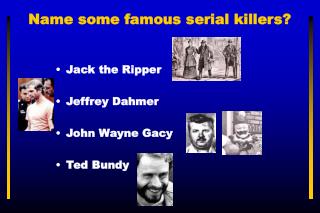 Famous Advertising Slogans - . directions:. one student stands with back to this presentation. team members read the

Serial Killers - . serial killers are a study in the psychopathic perversion - usually a man with a sexual dysfunction.

Integer Multipliers - . multipliers. a must have circuit in most dsp applications a variety of multipliers exists that

DeltaV Serial Interface - . upon completion of this module you will be able to: interface deltav with serial devices

Review 1 - . ee138 – sjsu. serial and parallel representation binary information to be transmitted from one location to