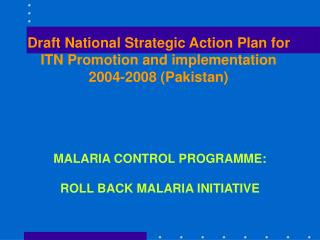 MALARIA CONTROL PROGRAMME: ROLL BACK MALARIA INITIATIVE Draft National Strategic Action Plan for ITN Promotion and implementation 2004-2008 (Pakistan) PROGRAMME GOAL AND OBJECTIVE To reduce the burden of malaria by 50 percent by the year 2010 RBM Implementation all over the country by 2006

Malaria M &amp; E Data Sources - . objectives. by the end of this session participants will be able to: recognize

Monitoring and Evaluation: Malaria-Control Programs - . learning objectives. by the end of this session, participants

Control and Prevention of - . dengue fever malaria and leishmania. objectives: you students will be capable to. identify