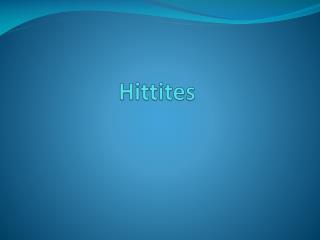 Dawn of the Empires - . mesopotamia. the akkadians- 2360-2230 b.c.e. led by sargon conquered sumerian city-states. the

The Phoenicians and the Lydians along with Judaism - . ch 2 section 5 &amp; 6. chapter review. who was gilgamesh? why

The Fertile Crescent Empires: The Hittites - . as the babylonian empire declined, other civilizations prospered around

Chapter 3 - By: brandon bumanglag. chapter 3 . the mediterranean and middle east, 2000-500 bce. and daniel takayama. the

The Hittites and the West

Empires of Mesopotamia - . 2350 bc sargon and the akkadians conquer mesopotamia. 612 bc the chaldeans took over the