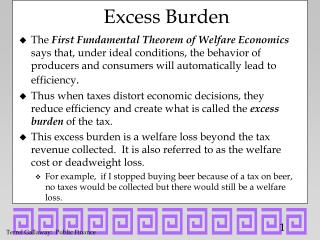 Excess Burden. The First Fundamental Theorem of Welfare Economics says that, under ideal conditions, the behavior of producers and consumers will automatically lead to efficiency .

Excess Notation - . the other way to represent integers. excess notation (examples are in 8 bits to save space). fixed

Excess Rainfall - . reading for today’s material: sections 5.3-5.8. excess rainfall . rainfall that is neither