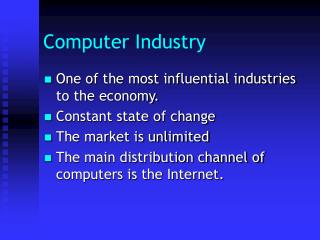 Computer Industry One of the most influential industries to the economy. Constant state of change The market is unlimited The main distribution channel of computers is the Internet . The Future of PC Technology Amy Gentile Susie Warning Besty Buckham Kehinde Walker Rajnita Gupta

Bridging the Technological Gap between Academia and Industry: Towards a Successful e-Commerce Graduate Program

Computer Basics for Kids: Just How Does a Computer Work? - . look at this picture of a computer from our computer lab. a