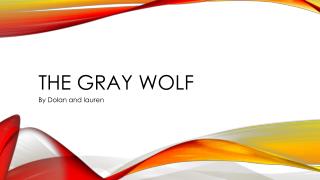 Visual and performing arts - . eld unit 2. lesson objective. students will use adjectives to discuss how instruments

Life Cycle Of A Gray Wolf - . by: galilea oliva -beltran. birth. when the pup is first born its both deaf and blind for