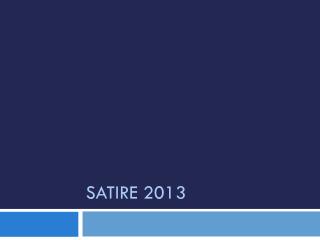 Satire 2013. Definition. An art form in which human or individual vices, follies, abuses, or shortcomings are criticized through ridicule ideally with the intent to bring about improvement Say what?

Satire - . a literary form that combines humor and wit with criticism the purpose of which is the improving of the human

SATIRE - . satire definition. vices and shortcomings are held up to ridicule, ideally with the intent of shaming

Satire - . journal 3-1. what is satire? what is the goal of satire? what do you associate with “satire”?. defined.

Satire - . “a genre of comedy that is directed at ridiculing human foibles and vices, such as vanity, hypocrisy,

Satire - . what are examples of satire that come to your mind?. satire. satire. it is a genre of comedy that is directed

Satire - . what is satire?. “a work or manner that blends a censorious attitude with humor and wit for improving human

SATIRE - . learning about satire through jonathan swift’s “a modest proposal” . satire. the use of humor, irony,

Satire - . humor ously and effectively makes a point in which the end product can be instructive and edifying . satire is

Satire - . a literary work that ridicules its subject through the use of techniques such as exaggeration, reversal,

Satire - . change through humor. what is satire?. satire is a literary genre that relies heavily on irony , wit , and

Satire - . what is satire?. a mode of writing that exposes the failings of individuals, institutions, or societies to

Satire - . satire. satire tries to persuade the reader to believe or to do something by showing the opposite view as

Satire - . a way for writers to criticize their society. since ancient times, writers have used satire to: attack

Satire - . definition. a literary technique used to make fun of the vices of society… …for the purpose of change .

Satire - . even light-hearted satire has a serious after-taste: &quot;first make people laugh, and then make them

Satire - Drawing attention to a social vice or problem using humor, either comical or dark, using a variety of literary

Reminders about Satire and Parody - . part ii. tone. satire can be humorous or serious and is aimed at a specific person