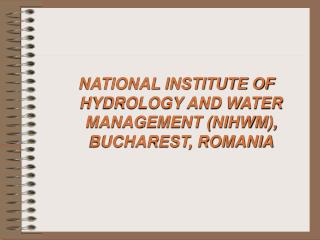 Findings of Romania case study - . review of transitional restrictions maintained by romania with regard to the

Study Abroad Romania - . statistics education and its applications in romania may 8 – 24, 2009. all the places you will

CE 394K.2 Hydrology – Lecture 1 - . syllabus, term paper, sequence of topics hydrology as a science and as a profession

SUBCOMMITTEE ON HYDROLOGY - . overall goal – from purpose statement: “to improve the availability and reliability of

Interaction of nanostructured silicon with the living matter - . irina kleps national institute for research in

ROMANIA - . by:destinee smith ,and jahsaun arnett. my country. my country is romania. country capital. my capital is CE 374K Hydrology – Lecture 1 - . syllabus, sequence of topics hydrology as a science and as a profession hydrologic