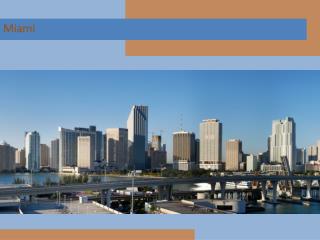 Miami. Miami: Climate. Miami’s client is similar to Houston in several ways. It has one of the highest levels of rainfall of any major U.S. city. It receives an average of 58.6 inches of rain per year. Statistically it is the most likely major city to be hit by a Miami - . taylor allen june 3, 2010 period: 6. table of contents. climate of miami how to get to miami hotels food

Diamond Jewelry Miami | Miami Jewelry - When it comes to jewelry store in miami fl, the name of jae's jewelers comes

Miami Translator in Miami Fl - At interlangueinterpreting.com, you can find the professional miami conference

Miami Therapy - Visit our site http://www.soundmindmiami.com/miami-therapy-services-provided/ for more information on