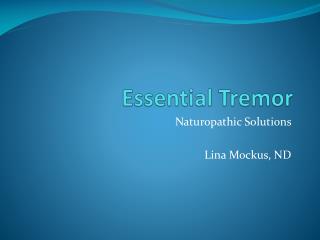 Essential Tremor. Naturopathic Solutions Lina Mockus , ND. What is essential tremor?. Everyone has some sort of tremor, but it is so small in most people that it is not noticeable. The most common type of tremor is essential tremor (ET). ET is eight times more common than Parkinson’s disease. Essential Palatal Tremor - . 929-1. figure 1. aetiology of 287 cases with rpm. note that more than a quarter belong to

Essential Tremor and Parkinson’s Disease - . part 5 of 7. et: overlap with pd. et and pd are among the most common

Update: Treatment of Essential Tremor - Report of the quality standards subcommittee of the american academy of

Treating Essential Tremor Effectively - Dr. Shivam Mittal - If your hands or any other body part is shaking involuntary,

Is It Essential Tremor or a Parkinsonian Syndrome? - . diagnostic considerations in primary care. faculty tanya simuni,